The latest version of pkgclip can be downloaded here. For Arch Linux users, the AUR has a PKGBUILD.

You can find the source code on this GitHub, where you can also report bugs, send suggestions or other (constructive) feedback.

PkgClip is a little helper for Arch Linux users, that will scan your pacman cache directories and help you trim it a bit.

Whenever pacman downloads packages, it saves them in a cache directory, and never removes them. Over time, this cache can grow a lot.

While pacman does offer options to clean your cache, they are very basic. Its option --clean (-c) will remove packages that are no longer installed from the cache (as well as currently unused sync databases. Note that PkgClip does not touch databases, only packages.), or remove all packages if you specify it twice.

PkgClip aims at giving you a little more options. To do so, it will classify all packages into different "groups" (also called "reasons", as in reason for the recommended action), each group having a recommendation (Keep or Remove), used as default choice.

You will of course be able to then review it all, and decides which packages shall be removed, and which shall not.

Find a reason for your action

When scanning pacman's cache, PkgClip will put every package into a group, also called "reason." Reasons, because they'll be used to determine whether a package should be kept, or removed. (Well, to determine the recommended action, up to you to go with it or not, of course.)

Note: All packages usually have a version number, that of the installed software, alongside a package release number. That is, package foobar-1.2.3-4 would be for foobar v1.2.3; and it is the fourth package release for that version.

For each package, PkgClip will check whether or not it is installed on the system. The test will determine whether this version of the package is installed, or another one. Based on this, each package will fall under one of the following : 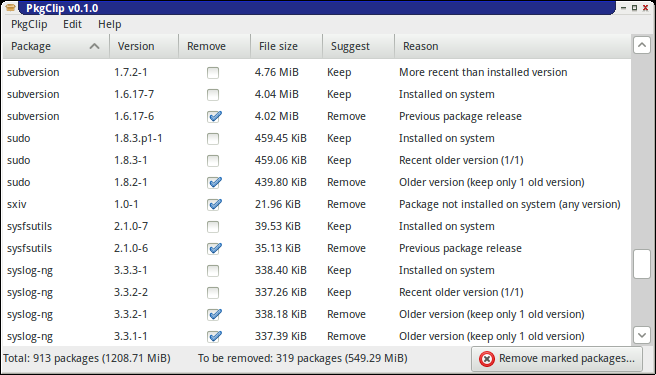 As a result, you might have quite a few packages marked to be removed, but still keep a few more than what pacman -Sc would do. Of course you can tweak this selection:

As you probably know, you cannot actually just run pacman -Sc from your terminal, if you're logged in as a regular user. Because those files belong to root and therefore root privileges are required to do anything.

PkgClip is not intended to be run as root of course, and will use a little helper whose only purpose is to remove the files. This helper will run as root, and rely on PolicyKit to ensure correct authorization has been granted.

Obviously it requires you to have PolicyKit installed, but also (assuming default configuration) a PolicyKit agent, which is the one in charge of asking for your/root password and making sure you don't just press random keys and whatnot.

You can check out the following blog posts, or head over this topic on Arch Forums.
Top of Page